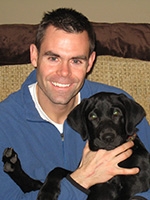 My path in going to a university to earn a four-year degree was not based on anysingular, dramatic circumstance at home or in the classroom. Rather, "going away to college" just seemed like the natural, normal thing to do that everyone else did. Although it was not the path my parents chose (and I was an only child without brothers and sisters to emulate), I intuitively understood that things were different nowadays, and it was the next logical step for me.

My mom, following in her older sister's footsteps, began college but very quickly realized it wasn't for her. As a professional musician playing in a few different bands, she realized that performing and giving lessons would not afford her the time to complete a degree so she left after a few weeks. My father got his associate's degree in electronic engineering. Considering most of his education consisted of being home-schooled by his mother while he grew up in Peru (my grandparents were missionaries there for nearly 50 years), this represented a substantially different institutional experience. Yet for his career path and interests in the 1950's, this was perfect. Both of them chose the educational path that best suited them at the time. My mom would go on to hold several secretarial jobs and even open up her own business. She was very good at what she did. My dad worked as an engineer at several manufacturing plants and labs where he was adept at troubleshooting computers and other electronic devices. My Mom and Dad are both naturally inquisitive and instilled in me the desire to learn in both formal and informal capacities.

In the community in which I grew up, Waunakee, Wisconsin (a suburb of Madison), I was surrounded by mostly high achieving students. All of my friends just understood that after high school you go to college -- that's just what one does. The motivation to pursue a bachelor's degree came from the environment in which I was raised. Mom and Dad always told me that I could be whatever I wanted to be, and I was surrounded by teachers, classmates, and friends who all held the same opinion. Being a good student and, in general, liking school, going to college seemed to be the logical thing to do. In addition to my education, I was also a pretty good track athlete and I knew I wanted to pursue that interest in college.

So, for me, I never recognized I was a first-generation college student. That whole concept didn't even occur to me until I, myself, became a faculty member at a university. I suppose when I returned for my graduate degree (which occurred five years after I had completed my undergraduate) it dawned on me that I was doing something unusual. Most of my friends, for example, stopped with their bachelor's degree. So when I finished my second degree it hit me that now I had done something a little out of the ordinary.

I will say that during my college career I felt like both my grandmother and aunt were the ones who found subtle ways to encourage me. My grandmother (Granny) I think probably only completed the eighth grade but she really valued education. (Perhaps it's because she only completed the eighth grade.) My aunt, my mom's older sister who finished college, was a high school teacher, so education was clearly important to her. I remember getting letters from both of them when I was at the university and they were very kind and supportive. I think because they both lived in California and I only saw them on rare occasions, the fact that they took time to stay in touch with me was meaningful.

To be honest, though, my persistence in achieving an undergraduate degree (and my master's degree as well) was driven by athletics. The thought of leaving school would mean leaving my team, and that's something I just couldn't imagine doing. While earning my master's degree I had a graduate assistantship, and I was writing and conducting strength and conditioning workouts for a variety of teams (several hundred athletes) and also coaching track and field. Again: leaving would mean abandoning all of the student-athletes that were counting on me.

I never felt different than other classmates because I was a first generation college student -- for me that monniker didn't exist and no one around me made something like that an issue. This may have had something to do with the fact that (I suspect) I was surrounded by a lot of other students who were in a similar situation. The University of Wisconsin at La Crosse was a medium-sized state university originally founded as a teacher's school (normal school) which is similar to AppState. It's this similarity which I think draws me to the students I teach and advise: many students were raised in rural areas (like I was) and have come here because they feel it's simply what they should do.

So, like my parents, I simply chose the path that made the most sense for me. I went to college as an undeclared major -- I didn't know what I wanted to do upon graduation, and that may be the most sincere reason why I went to college: I wanted to have experiences to help me figure out what it was I was good at and what I could make a living doing.